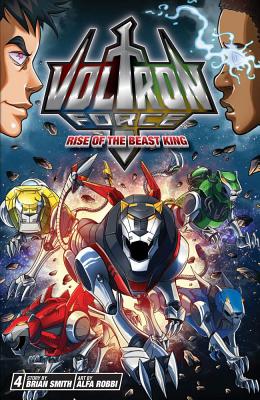 The beloved '80s classic is back, better than ever, and ready to defend the universe! Let's Voltron!

Reads L to R (Western Style) for all ages.

Years ago, Voltron mysteriously disappeared, and the five lions were scattered throughout the universe. Over time, the lions were recovered by the original Voltron Force: Lance, Pidge, Hunk, Princess Allura, and Commander Keith. Now, with the help of three new recruits, Voltron rises again, to defend the universe once more! Let's go Voltron Force!

Return of the Beast King
No one knows for certain where Voltron came from, but one ancient legend tells of a sixth part of the mighty robot: a terrible warrior called the Beast King. Asleep for many years, the Beast King has awakened and is determined to rejoin his destructive spirit with the Voltron Lions!
Reviews from Goodreads.com