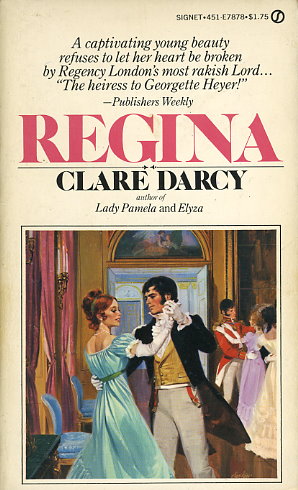 REGINA KNEW WHAT TO EXPECT FROM A MAN LIKE LORD WREXAM

Though barely twenty-three, lovely, elegant Regina had learned how cruel it was to be wed to a handsome, faithless rake- -- a captivity ended only by her husband's fortuitous demise.

Now Regina vowed to protect her innocent young niece from a similar agonizing alliance with the notorious Lord Wrexam, whose good looks and fabulous wealth were as irresistible as his reputation was lurid.

With determination Regina stepped between Lord Wrexam and the girl. And with dismay Regina realized that now she herself was the target of this man who made love a game he would break any rule to win.

But Regina's hard-won wisdom was soon warring with the folly of her heart -- -and only iron resolve would safeguard her from the maddeningly dangerous charms of the most infuriatingly romantic nobleman in all the realm. . . .
-----------------------
UK Edition

It was a bargain she could not refuse. Regina Audwyn was offered a secure home and a London season if she would take care of her uncle's children, supervise the social debut of his daughter, Arabella - and prevent her marrying rich, unsuitable Lord Wrexam.

Regina's good fortune seemed assured, until she discovered that Wrexam's charm and determination were more than a match for her own...