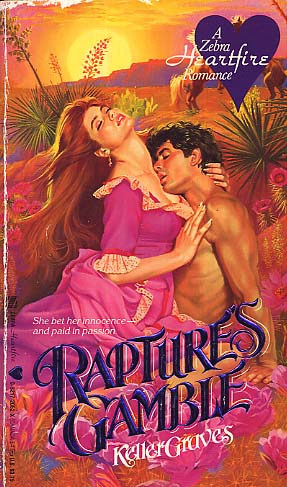 Share:
HE OWED HER NOTHING
When Army Captain Cole Barrett first met impulsive Erin Donovan at a poker game, he knew without a doubt she just wasn't his type. Her flamboyant, outspoken style was too unconventional, her gleaming copper hair was too fiery, and her supple young body was too curvaceous. Still, there was something about the ill-mannered little chit that heated his desire and the virile officer couldn't get her out of his mind. Cole was certain that only a night of sensual indulgence would make him forget the wildcat, so when Erin was hopelessly in debt to him, he wagered to forget the cash if she'd share her passion!

SHE PAID WITH LOVE
Amber-eyed Erin preferred any hard-working cowboy to the military career man, but somehow Cole Barrett fired her imagination. His deep, smooth voice made her tremble with anticipation; his erect, towering frame made her lose her self-control. The Comanche-Irish maiden tried to convince herself how odious the captain was: he was an aristocratic snob and an Indian fighter. But she didn't hold back when Cole made his preposterous offer. Erin eagerly bet her innocence, even knowing she'd lose. Already she wanted him forever--and was willing to stake a lifetime of married bliss on a night of the uninhibited ecstasy of RAPTURE'S GAMBLE