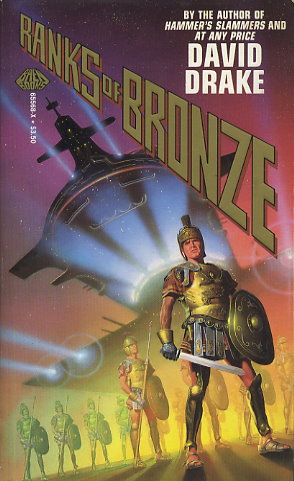 Share:
THE ALIENS WERE LOOKING FOR A FEW GOOD FIGHTERS, WARRIORS WHO COULD BE BRAVE WITHOUT BLASTERS, AND CONTENT WITH SHIELDS OF BRONZE ...WHAT THEY GOT WERE ROMANS

GAIUS VIBULENAS: From a raw kid, he became an accomplished soldier--and a leader of men.

QUARTILLA: She was everything a man could want--you would never guess she wasn't human.

POMPILIUS NIGER: He learned young that the worst dangers a soldier faces come from those who give him his orders.

CLODIUS AFER: A veteran, he didn't ask questions--until his alien masters forced the answers on him.

The aliens knew that in these primitives they possessed the finest low-tech soldiers in the galaxy. What they did not understand was the madness of enslaving a Roman legion and leaving them with swords in their hands.