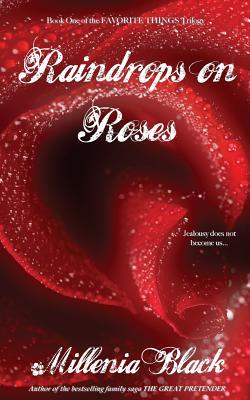 Michael Frost—Not yet thirty, he's already suffered significant losses in life but isn't quite aware that he's never fully recovered. Michael lives with the high school sweetheart who'd helped him through the worst of it—but with whom he's fallen out of love. However, he doesn't realize it until he meets...

Priscilla Bauer—The gorgeous granddaughter of a Hollywood legend, Priscilla was rescued from the clutches of an abusive mother, only to lose her savior and protector when her famous grandmother suddenly dies. When she meets and quickly falls for Michael, she has no idea he's in a decades-old relationship with...

Amber Holland—Who's having none of it. Having been raised by an unstable mother and no father to speak of, Amber's had Michael securely covering old wounds since high school. Irrevocably in love, she’s been expecting a ring...like, yesterday. Losing him to someone else is not. an. option.

Raindrops on Roses kicks off a suspenseful trilogy that not only keeps you guessing—it’ll have your jaw on the floor by the end!

And that's just Book One.

Books 2 & 3, Blue Satin Sashes and When the Bee Stings are out now!

"Intensely intriguing and deeply riveting, Black's latest is a first-rate page-turner that will draw you in from the very beginning and never let go." —Sheri Melnick, RT Book Reviews

"Ms. Black is a talented writer, and I can't wait to read many more of her books..." —Carol Ann Culbert Johnson, MyShelf.com

"Millenia Black is a mistress at neatly laying out each part of the story, like building an elaborate building that forms a fascinating whole. She clearly and succinctly draws verbal pictures of each character and their interrelationships with each other. It is masterful..." —Jeri Neal, The Romance Reader's Connection
Reviews from Goodreads.com