Rainbow in the Mist — Phyllis A. Whitney 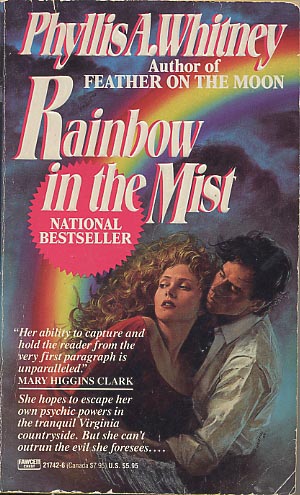 She hopes to escape her own psychic powers in the tranquil Virginia countryside. But she can't outrun the evil she forsees...

"YOU MUST STAY. YOU KNOW YOU MUST. YOU'RE COMMITTED TO STOPPING WHATEVER HAS BEGUN. YOU'LL FIND THE MURDERER YOU SENSE..."

Unlike her mother, a famous psychic, Christy Loren fears her unwanted legacy and the horrifying visions that always appear too late. Desperate for peace and safety, she flees to the Blue Ridge Mountains and the reassuring presence of her Aunt Nona. But a mystery even more threatening awaits her, a puzzle surrounding a writer's death and the disappearance of her enigmatic cousin, Deirdre.

Visions of something evil and violent envelop her--pulling her unwillingly into the ominous web that surrounds Deirdre's disappearance and the secrets locked in the heart of Deirdre's tormented husband--a man to whom Christy is passionately drawn.

Here in this peaceful place, something wicked hides. Here, Christy knows the blood-chilling dream that has haunted her will come to terrifying life. For someone will do anything to stop her from discovering the dark secret hidden in the mist ...or the love that, like a rainbow, awaits.
Reviews from Goodreads.com