Quest for the Well of Souls — Jack L. Chalker 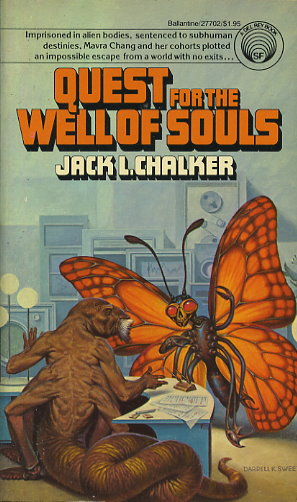 MAROONED ON THE WELL WORLD
For eleven bitter years, Mavra Chang had been a prisoner on the Well World the master-world where hundreds of impossible races existed, each in its own strange environment. Her once-human companions had been mutated into alien forms, and she was isolated and abandoned. Worse, her body was cruelly changed to a monstrous and useless travesty of what she had been.

Above her circled the planetoid which contained Obie, the supercomputer that could restore her body and her powers. But the only means of reaching him was by a spaceship that was stranded in the northern hemisphere--where no flesh-and-blood creature could exist.

To make matters worse--if that were possible!--her enemies were plotting to steal the ship and escape from the Well World without her. Other, even more wicked enemies were coming to kill her. Her last shred of hope was gone.

But Mavra Chang had never learned to surrender to fate...and this wasn't the time to start!
Reviews from Goodreads.com