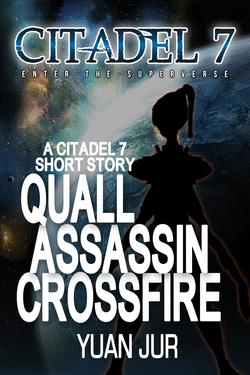 Share:
Talaza Bane is a Quall assassin. He lives and breathes the clan’s code. All races known to him have one name for his world, Tora. It means─ to engage. No race survives on Tora without trial or loss, not even the invincible Scarzen warriors south of his mountain.
On the next dawn of his world’s sun, all Talaza has known as real and true will be tested in the extreme. Not his stealth nor skill with blade and poison will help his choice and consequences of his actions will reach farther than the wisest of his clan could ever conceive.
Worlds outside Tora and its star system were made beyond reach for a reason long ago. Agents from other worlds both spirit-sider and solid explore Toran forests and the imposing hinterlands, then leave without engagement. Talaza has seen them arrive in their metal birds that sound like thunder. The last sky visitor was different. They did something. Hex, the Dark Star now stirs. He has lived on Tora in their dreams and spoke on the wind long before Quall lived on Black Mountain. Hex is not of Talaza’s world. The mystics always told he came from the sky.