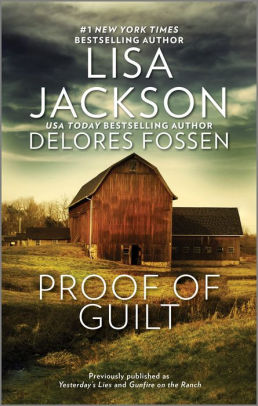 Enjoy two edge-of-your-seat classics of romance and suspense from bestselling authors Lisa Jackson and Delores Fossen, available now in one volume!Yesterday’s Lies by Lisa JacksonIt's been five years since Trask McFadden betrayed Tory's trust and landed her father behind bars. She'd hoped Trask was out of her life forever, but now he's back, claiming to have information that might prove her father's innocence. For the sake of her family, Tory's trying to forgive, but she's finding it much harder to forget when Trask stirs up feelings she'd thought were long gone…Originally published in 1986.Gunfire on the Ranch by Delores FossenDEA agent Theo Canton may have been the town bad boy, but murder was never his MO. Too bad his girlfriend at the time didn’t see it that way. Now Ivy Beckett isn’t just the girl who broke his heart—she’s the target of a killer. Theo vows to keep Ivy safe, even as he meets the son he never knew about. But will it be enough to catch the perp and give their family a second chance?Originally published in 2017.
Reviews from Goodreads.com