Promise of the Witch-King — R.A. Salvatore 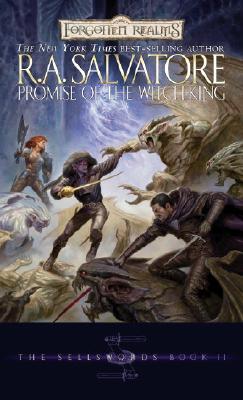 I grant you your soul, but not your life. Be happy that I have found a measure of mercy.

A lich of unspeakable power that people say has been destroyed, but whose hand still somehow holds the realm in its grip.

The Knight
A champion of good with secrets as dark as any assassin's, she is the unlikeliest ally a dark elf has ever had.

Entreri and Jarlaxle might be strangers in the rugged, unforgiving mountains of the Bloodstone Lands, but they've been in difficult places before. Caught between the ghost of a power-mad lich, and the righteous fury of an oath-bound knight, they've never felt more at home.
Reviews from Goodreads.com