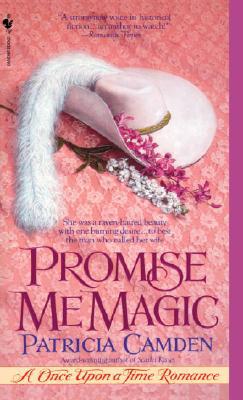 Share:
With a fury born of fear Katharine had taken aim at the bandit who dared to trespass on her land, and fired -- only to discover that the powerful warrior she had felled was a man she thought long dead...a man who had stolen her fortune...a man she despised. Now, as she gazed into Alexandre von Lowe's smoldering gray eyes and felt the overpowering pull of his attraction, she wondered why she'd let the scoundrel live -- and how she was going to tell him that she was masquerading as his wife. Weary of a war that had brought him nothing but death and madness, Colonel Alexandre von Lowe had ridden hell for leather for Lowe Manor, the home he had not seen in seventeen years, only to be met by a raven-haired temptress who came at him with her pistol cocked and her claws unsheathed. Who was this fair deceiver who threatened him one moment and pretended to be his loving wife the next? Determined to ferret out her deepest secrets, he drew her near. But even as he penetrated her cool facade and she began to discover the pain beneath his soldier's arrogance, neither could forget their terrible suspicions -- until a common enemy drew them into bloody battle...and into the raging heat of each other's arms.