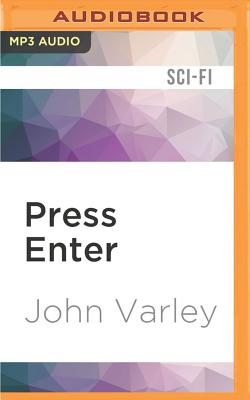 Share:
The Science Fiction Book Club Collection Press Enter by John Varley and Illustrated by Bob Eggleton is a small bu powerful little book. Press Enter won both the Hugo and the Nebula Award in 1984. In a sense it is the direct descendant of Roger Zelazny's "My Name is Legion" in which the the central character has wiped his identity from all records and databases and is free and invisble. It is one of the earlies SF stories to deal with the language of personal computer and of hackers, just becoming the rage in SF circles in the early 1980's and of the stories that set the stage for the advent of William Gibson's "Neutomancer" Today we can notice perhaps a bit too much exposition about the details of computers and how they operate, but I assure you it was necessary in 1983 when the story first appeared and terms like"software" were still relatively exotic. It is a darker vision than most of the early Varley, and is set in more or less the present world, both uncharacteristic of his work. he was often given to mystery plots, and shy men---but competent men and women nevertheless. This is a horror story, and not optimistic about technology---it is so extreme in fact that the central character is thinking about getting rid of his indoor plumbing. And to top it off, it is about an older man and a younger woman ----shades of Heilein! This is a story by someone who isn't doing what he used to do . Maybe it is by someone who is getting ready to stop entirely.