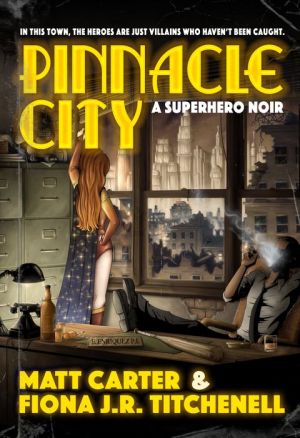 To some people, Pinnacle City is a glittering metropolis, a symbol of prosperity watched over by the all-star superhero team, the Pinnacle City Guardians. But beneath the glitz and glamour is a gritty underbelly, one still feeling the physical and economic damage of the superhero-villain battles of generations past, where the lower class―immigrants, criminals, aliens, sorcerers, and non-humans alike―jostle and elbow for scraps to scrape by on.

Private investigator Eddie Enriquez is an ex-con and veteran with powers of his own who still bears the scars of his time as a minion for a low-level supervillain. Good work's been hard to come by until a mysterious woman shows up at his office with a case the police and superheroes are ignoring: the suspicious death of a prominent non-human rights activist.

Meanwhile, superhero Kimberly Kline, a.k.a. Solar Flare, has just hit it big, graduating to the Pinnacle City Guardians. With good looks, incredible superpowers, and a family name that opens doors, the sky is the limit. But in trying to make the world a better place ... she'll discover Pinnacle City isn't as black and white as it once seemed.

From the minds of Matt Carter and Fiona J. R. Titchenell, PINNACLE CITY is a pulpy, throwback noir of yesteryear, where two people from opposite sides of the track must team up to do good in a world full of bad.
Reviews from Goodreads.com