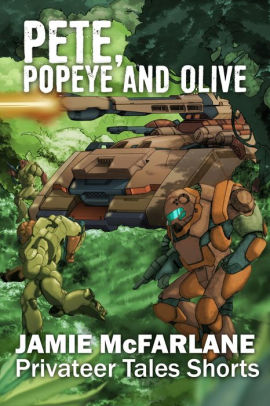 Share:
Pete Hoffen has spent the last year in the rainforest of the Amazon, slogging through hell and back in service to his country. When an opportunity to join the Mechanized Infantry presents itself, Pete is first in line. He knows that he's going to get shot at one way or another, but the idea of sitting in a warm and more importantly, dry mechanized suit appeals to him almost beyond reason.

While still training in the jungle, Pete's squad is called out to intervene in a skirmish in a nearby village. Of course, the Marines haven't seen fit to certify his squad with ordnance. The fact that they'll be up against a platoon of squishies doesn't convince him that's it's any better of an idea and things turn quickly to crap when they discover the squishies are protected by grav-tanks.

Pete, Popeye and Olive is a fast paced, short-story with plenty of action.