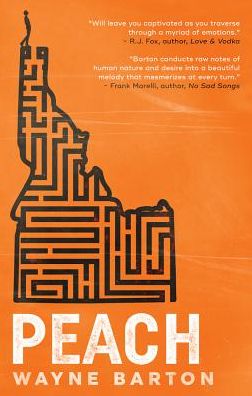 Following the untimely passing of a close friend, British songwriter and producer, Freddie Ward, arrives in Bliss, Idaho to work on a comeback album with beloved singer-songwriter, Hal Granger. Adrift and bereft, Freddie is looking to gain a sense of perspective after a series of bad decisions—decisions that cost him his relationship and life as he knows it. However, almost as soon as Freddie arrives in Idaho, Hal drops an unexpected and devastating bombshell.

Far from the hustle and bustle of his life in England, out in the stark isolation of the northwestern U.S., with time to think, to reflect, Freddie slowly begins to rebuild his life, haunted both by the events of the recent past and his reactions to them. Through words of wisdom from Hal and a series of meandering, existential, and profound conversations, PEACH explores themes such as love, loss, loyalty, and friendship; second chances and redemption; how to make the most of your time; and, last but not least, the meaning of home.
Reviews from Goodreads.com