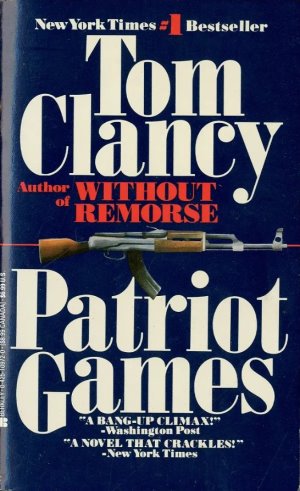 Share:
For readers who wondered how Tom Clancy could possibly top The Hunt for Red October, the sensational Red Storm Rising provided the answer. It sold a million copies in hardcover alone, and firmly established Clancy at the head of the league.

And now Clancy Tops Red Storm Rising -- with Patriot Games. Filled with the exceptional realism and authenticity that distinguished his two previous books, but on a far more intimate scale, and featuring Red October's charismatic hero, Jack Ryan, Patriot Games puts us on the cutting edge of another type of war, but one no less deadly: the international battle against terrorism.

It is fall. Years before the defection of a Soviet submarine will send him hurtling into confrontation with the Soviets, historian, ex-Marine and CIA analyst Jack Ryan is vacationing in London with his wife and young daughter, when a terrorist attack takes place before his eyes. Instinctively, he dives forward to break it up, and is shot. It is not until he wakes up in the hospital that he leans whose lives he has saved -- the Prince and Princess of Wales and their new young son -- and which enemies he has made -- the Ulster Liberation Army, an ultra-left-wing splinter of the IRA.

By his impulsive act, he has gained both the gratitude of a nation and then enmity of hits most dangerous men -- men who do not sit on their hate. And in the weeks and months to come, it is Jack Ryan, and his family, who will become the targets of that hate.

Sweeping from England to Ireland to America with ever-growing momentum, its suspense steadily intensifying as Ryan must summon all the skills and knowledge at his command to battle back against his nemesis, Patriot Games gives us a remarkable set of characters in the most desperate struggle of their lives. As with Tom Clancy's two previous triumphs, it is both a marvel of the storyteller's art -- and, as the headlines attest, frighteningly real.