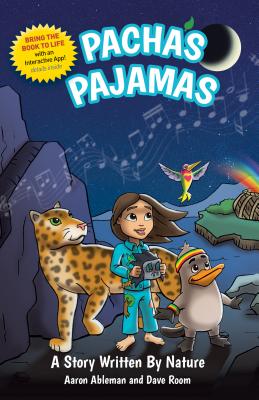 This animated book is blowing kids’ minds! Hovering a mobile device over the images in the book BRINGS THEM TO LIFE with animated and educational videos. Works with the FREE interactive Augmented Reality app, Pacha Alive. The videos feature the voices of celebrities including Cheech Marin, Mos Def, Talib Kweli, Agape Youth Choir and 30 young artists.

Pacha’s imagination is bigger than the Andes Mountains, homeland of her ancestors. The plants and animals on Pacha’s PJs come alive in her dreams and she journeys with them to learn more about herself. After a stress-induced asthma attack, her magical pajamas carry her into an epic dream where she encounters a handful of critters lamenting the state of their home. Disguised as a little gorilla, Pacha joins in and together they decide to organize a Nature Festival that brings all species together.

Full of musical plants and dancing animals, the PACHA JAMMA festival is a worldwide call-to-action to save the planet from destruction. Despite her reluctance, Pacha is chosen to be the Director of Action over an infuriated Mr. Tick, President of the New Food Order, which seeks to support the continued growth of the human population and settlements. Pacha senses that the angry tick is scheming to disrupt PACHA JAMMA. With the help of her plant and animal friends, Pacha races against time to decipher a cryptic puzzle which outlines Mr. Tick’s dastardly plans. Just as she solves the puzzle, a massive hurricane hits PACHA JAMMA. While waiting out the storm, Pacha discovers Mr. Tick’s underground hideout, where she learns the full extent of Mr. Tick’s plans.

After the storm, the festival jubilantly reopens with a great feeling of connectedness across all species. But Pacha has a hard time celebrating knowing Mr. Tick’s intentions. Can Pacha pull together a team to stop Mr. Tick’s plans to disrupt PACHA JAMMA?

The book includes lyrics of tens of award-winning songs and a Dream Journal for recording dreams.
Reviews from Goodreads.com