Out of Nowhere — Maria Padian 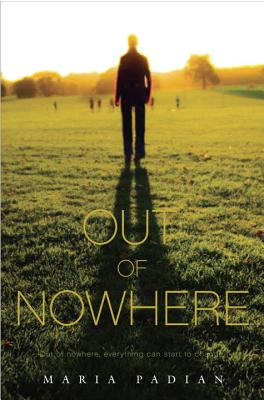 At Maquoit High School, Tom Bouchard has it made: captain and star of the soccer team, boyfriend to one of the prettiest, most popular girls, and third in his class, likely to have his pick of any college, if he ever bothers filling out his applications. But life in his idyllic small Maine town quickly gets turned upside down after the events of 9/11.

Enniston has become a "secondary migration" location for Somali refugees, who are seeking a better life after their country was destroyed by war -- they can no longer go home. Tom hasn't thought much about his Somali classmates until four of them join the soccer team, including Saeed. He comes out of nowhere on the field to make impossible shots, and suddenly the team is winning, dominating even; but when Saeed's eligibility is questioned and Tom screws up in a big way, he's left to grapple with a culture he doesn't understand and take responsibility for his actions. Saeed and his family came out of nowhere and vanish just as quickly. And Tom may find himself going nowhere, too, if he doesn't start trying to get somewhere.
Reviews from Goodreads.com