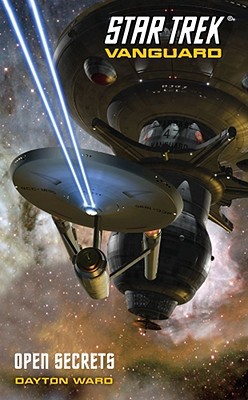 The Taurus Reach is in turmoil.

With tensions mounting between the Federation and the Klingon Empire, Ambassador Jetanien works frantically on Starbase Vanguard to halt the escalation toward war. Commodore Diego Reyes, the station's former commander, awaits trial for treason, while the shattered mind of his intelligence officer, T'Prynn, becomes the battlefield in a fight for her very life.

But even as matters deteriorate, the discoveries made in the Taurus Reach have captured the imagination of one of the Federation's most promising scientific minds: Dr. Carol Marcus believes she is close to solving a puzzle that will transform her life's work. Meanwhile, an unexpected defection brings a new perspective to the investigation, and Vanguard's Lieutenant Ming Xiong is confronted with an artifact that could be the key to decoding the TaurusMeta-Genome.

But with Operation Vanguard teetering between its greatest breakthrough and a conflict that could engulf two quadrants, its future may depend on the man Starfleet has selected to replace Reyes as base commander: Admiral Heihachiro Nogura.
Reviews from Goodreads.com