One Under — Cynthia Harrod-Eagles 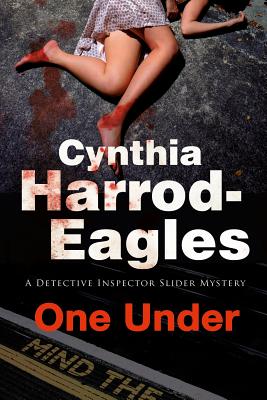 For a policeman, there are some questions that have to be asked even if you don't want to know the answers...

A middle-aged man jumps under a tube train at Shepherd's Bush station, and a teenage girl is killed in a hit-and-run, in a country lane puzzlingly far from her home on the White City Estate: two unrelated incidents which occupy DCI Bill Slider and his team during a slack period. At least it's a change of speed after the grind of domestics, burglaries and Community Liaison.

But links to a cold case -- another dead teenager, pulled out of the River Thames -- create doubts as to whether they are indeed unrelated. And slowly a trail of corruption and betrayal is uncovered, leading Slider and his firm ever deeper into a morass of horror.
Reviews from Goodreads.com

This is probably the darkest Bill Slider book of the bunch, but it is definitely one of the best in the series. I always love Bill Slider and his down-to-earth and honest method of policing. I like his team as well, but this time we are missing the wonderful Sergeant Hollis who committed suicide in the last book. The team is sharply feeling his loss, but Bill's supervisor has arranged for another old friend to join the team, so we welcome back Sergeant Hart, and how badly we have missed her earthiness and matter-of-factness. These books are wonderful police procedurals, but there is a definite humour streak that runs through each book. Porson's malapropisms such as "It'll be properly looked into. Every aspic." and the pun titles for each chapter, as well as the gallows humour of Slider and his team. In this book, Slider innocently goes to look at what looks like a hit and run that actually happened outside of his region. The 15 year-old girl originates from Shepherds' Bush though, so because he's bored with DCI paperwork he makes the trip. This seemingly innocent task sets off a whole maelstrom of bad and illegal business that could reach up to the very highest echelons of society. Slider, in spite of being warned off by some high level people, pursues his investigation doggedly until, all of a sudden, the powder keg blows up. Great book and highly recommended.