One Night in Napa — Allie Boniface 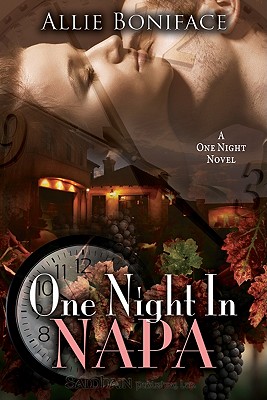 Can anything really change in 24 hours? Can everything?

A One Night story.

Journalist Grant Walker has one chance to salvage his job and his relationship with his domineering father. Terrorists have kidnapped a fading film star’s son, and Grant has scored the first interview with the grieving mother. Even better, a new twist has just arrived on the scene—an illegitimate granddaughter who hasn’t been heard from in seven long years.

It’s the story of a lifetime, and all Grant has to do is deliver.

After discovering a terrible secret about her birth, Kira March left home vowing never to return. With her father kidnapped and her grandmother cracking under media pressure, it’s up to her to find and destroy all evidence of that secret. Trouble is, a reporter has weaseled his way into the house looking for answers—and he isn’t leaving until he gets them.

Yet as the hours pass, Kira finds herself falling for the very man who could destroy her. And when Grant comforts her in the wake of a midnight tragedy, he remembers why it’s a bad idea to get emotionally involved with an interview subject. Especially when the family name is on the line.

Warning: This title contains a hunky hero who thinks he knows it all, an unconventional heroine who’s out to prove him wrong, a ticking clock, family secrets, and enough sexual tension to heat every corner of an enormous mansion…especially when the power goes out.