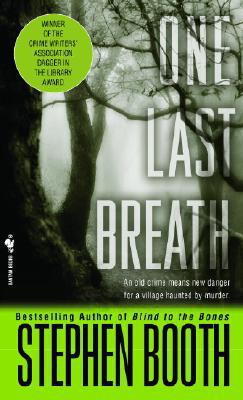 Set in England's legendary Peak District, Stephen Booth's acclaimed mysteries tell tales of men and women under siege by both ordinary life and extraordinary crime. Now, in a stunning, fascinatingly intelligent novel, Booth's uneasy young policeman, Ben Cooper, encounters an enigma that begins with a shocking murder and a victim's . . . One Last Breath

Around the ancient cave system in Derbyshire are thronging tourists, a medieval castle, and the thriving town of Castleton. With its underground tunnels and caverns, it's the perfect place for a man to hide -- or vanish. Detective Constable Ben Cooper and Detective Sergeant Diane Fry are looking for such a man, one who is on a rampage of revenge.

After thirteen years in prison, Mansell Quinn has emerged a man enraged. Hours after violating his parole, Quinn is the chief suspect in a fresh murder. And his original sin -- the brutal killing of his lover -- still haunts the valley. Because Quinn has always maintained his innocence, the people who lined up against him then are in dire danger now.

Ben may be one of those people, for he is the son of the cop who had arrested Quinn thirteen years earlier. But while his department races to find Quinn, Ben wonders if the man was indeed guilty of the first crime. Even when another new victim is found, Ben stubbornly clings to the old case -- and makes himself an open target for a killer.

For Ben, the real story of Mansell Quinn is as hidden as the caves beneath them. His search for answers will lead him on a twisting, harrowing journey through that maze of darkness -- into the shocking light of truth.
Reviews from Goodreads.com