On a Beam of Light — Gene Brewer 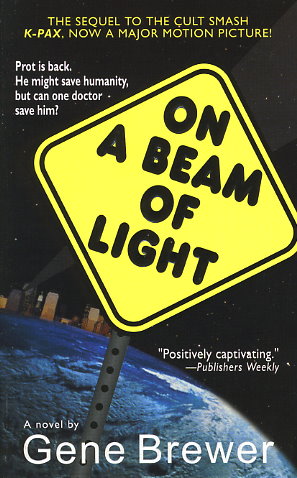 PROT HAS RETURNED.
Five years to the day, almost to the second, after he disappeared from the Manhattan Psychiatric Institute, leaving his host body in a catatonic state, the being known as prot (rhymes with goat) has returned. Now, in sixteen more sessions with psychiatrist Gene Brewer, prot reveals that he has come back to escort a chosen few to his home planet, K-PAX.

BUT HOW LONG WILL HE STAY?
K-PAX is an idyllic planet free of the pain and suffering of Earth. Prot has incredible insights into how to cure that suffering, and his radical ideas have made him a celebrity. Now, legions of people are longing to follow him home.

AND WHO WILL BE LEFT BEHIND?
But Dr. Brewer has heard it before. Five years ago, he discovered another person buried deep in prot's personality: Robert Porter of Montana. The mystery of Robert's illness and of prot's true origins lie deep within Robert's shattered psyche. Now Dr. Brewer must race against the clock to unlock the secrets of Robert's traumatic past and not only save his patient but maybe humanity...