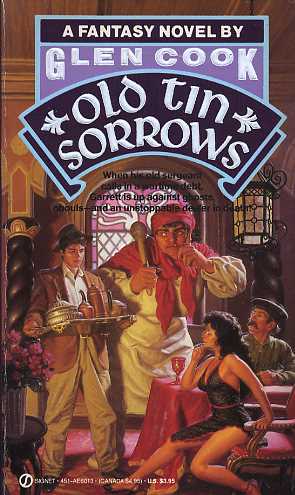 Share:
A CORPS OF CORPSES
was what it seemed Garrett had committed himself to find when Blake Peters turned up to reclaim some overdue favors. Someone was trying to kill Peters' boss, wealthy, retired General Stantnor, in a most lingering, painful, and maybe poisonous way. And Peters wanted Garrett to keepithe general from becoming a ghost of himself.

But Stantnor's mansion held a host of surprises for a human detective who thought he'd seen it all. For while the general was dying slowly, his employees were losing their lives at a far speedier rate. And when some of the not-long-departed tried to enlist their comrades in the growing legions of the dead, Garrett knew it was time to call in his own troops in the person of Morley Dotes, the toughest half-elf around. Morley would guard his back against whoever had decided that Garrett, too, belonged six feet underground. And meanwhile, Garrett would try to handle-or get his hands on-both the killer and the mansion's two elusive beauties -- who seemed invisible to everyone but Garrett...!