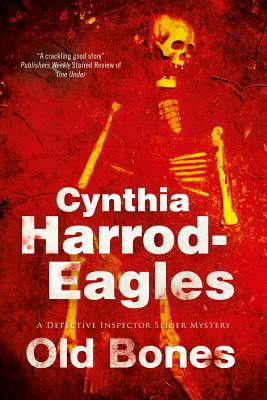 DCI Bill Slider tackles the coldest of cold cases in this absorbing mystery.

A young couple discover human remains buried in the garden of their new house: could this be the resting place of 14-year-old Amanda Knight, who disappeared from the same garden two decades before, and was never seen again?

The problem comes almost as a relief to DCI Slider, still suffering from the fallout of his previous case. He is not popular with the Powers That Be, and his immediate boss, Detective Superintendent Porson, reckons that at least this little puzzle will keep Slider out of trouble. After all, with a murder twenty years in the past, this is the coldest of cold cases. Most of the suspects and principal players are now dead too, and all passion is long spent… Or is it?
Reviews from Goodreads.com

I love Cynthia Harrod-Eagles' Bill Slider character. He's such an everyday guy and such a great boss to his CID team in Shepherd's Bush, London. Ms. Harrod-Eagles' sly sense of humour, and dry wit beams out on almost every page of every book in this series starting with the puns that are used in all chapter titles. In this case, Bill and his team are dealing with a set of "old bones", that have been buried for over 20 years. His hilarious boss. Porson thinks that Bill needs a cooling off period after the explosive last case that he was working, so he thinks old bones are just the ticket to keep his DI out of trouble, and most importantly, out of the eye of the higher-ups in the police department. But in typical Slider fashion, the bones open up a rather explosive line of enquiry, and the twists and turns in this case keep Bill and his team on their toes at all times. The final denouement was totally unexpected by me. I honestly didn't see it coming, But that is what a Bill Slider book is like. i love this light-hearted series. And the dark side, which is always there as well, brings everything into perspective and makes the books even more realistic. I highly recommend this series for those who love police procedurals with realistic characters and a cracking plot. And this book wouldn't even be a bad place to start with this series. If you do read it, it will make you want to read the whole backlist.