Of Passion and Pride — Kathryn B. Collett 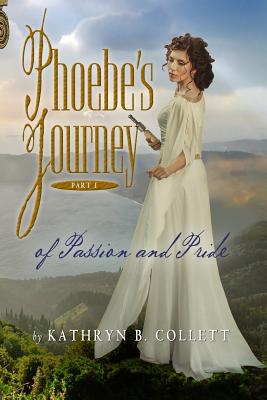 Share:
One of the best-loved books in the Bible holds a mystery. While working in Corinth, the Apostle Paul penned his letter to the Romans. Paul chose a woman named Phoebe to hand-carry his letter to the church in Rome. In Romans, Chapter 16, Phoebe's name is at the head of a long list of noble workers Paul praises for their service. "I commend to you our sister Phoebe, who is a deacon in the church in Cenchrea. Welcome her in the Lord as one who is worthy of honor among God's people. Help her in whatever she needs, for she has been helpful to many, and especially to me." Romans 16:1-2, NLT] Who is Phoebe? Why did Paul choose this woman to deliver his precious letter? And why would Phoebe volunteer to make a nearly 1000-mile, sometimes harrowing, always dangerous, journey from her home in Cenchrae, Greece to Rome? In this first book in the Phoebe's Journeys series, Of Passion And Pride, Phoebe is a teenager living near Corinth, Greece in the small shipping village of Cenchrae, a few miles south of the bustling city of Corinth. When her father dies unexpectedly, Phoebe finds herself at the center of a power struggle. Although she is only sixteen-years-old, headstrong Phoebe is determined to protect her father's legacy and retain ownership of her family's lucrative Greek shipping agency, regardless of the roadblocks she encounters. Evil jealousies, long-held resentments, and the mores of Roman society conspire against her. Even Phoebe's lifelong friends and family have their doubts and shake her resolve. Phoebe begins to question what she can believe and who she can trust. Meanwhile, just north of Phoebe's hometown of Cenchrae, the Apostle Paul is working in Corinth with fellow tentmakers, Priscilla and Aquila. Paul is struggling to make ends meet and fund his next mission. When their paths cross, an unlikely partnership is formed between Paul and Phoebe. This is a richly imagined backstory of the woman Paul chose to be his emissary and carry and present his letter to the Christian church in Rome. Of Passion And Pride brings texture and nuance to first-century life in the Roman Empire. Corinth is no longer just an ancient city on a musty map. You'll experience the cosmopolitan excitement and the debauchery of the Agora marketplace. You'll meet soldiers, servants, and gladiators who all have important roles in Phoebe's world. You'll enter the hushed halls of Proconsul Gallio's villa and hear him debate the Apostle Paul, using techniques taught to him by his father, philosopher Seneca the Great. Suddenly, life at all levels of society from the mariners to the merchants, from the synagogue leaders to the Corinthian girls' is real. Phoebe's Journey, Part One, Of Passion And Pride, is sure to capture your imagination and enhance your understanding of the life and culture in New Testament times.