Not Just a Witch — Eva Ibbotson 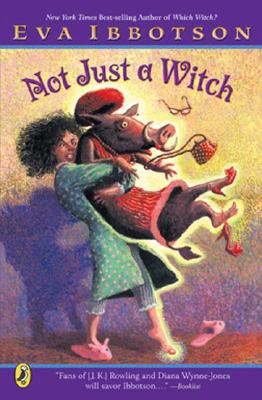 Share:
Hecate Tenbury-Smith, who calls herself Heckie, is an animal witch. Even as a child she could give people whiskery snouts and thick black fur, and so her parents enrolled her in a school for witches -- good witches, that is. Now, a recent graduate, Heckie is not just a witch, she's a witch who means to make the world a better place.

Heckie befriends a boy named Daniel and informs him of her mission to do good by turning bad people into animals. She envisions a band of Wickedness Hunters -- children and witches united to rid Well-bridge of Wickedness. Using her "Knuckle of Power," she creates a familiar -- a half-dragon, half-worm -- that gets sick when it meets anyone evil. With the help of Daniel and the dragworm, Heckie performs many a good deed, such as turning the mean owner of a nasty nursing home into a warthog.

But when Heckie falls in love with the conniving Lionel Knacksap, neither Daniel nor the dragworm can make her see that he is using her powers for his own gain. Will Daniel be able to foil his plan before hundreds of people become snow leopards and, even worse, Heckie's heart is broken?