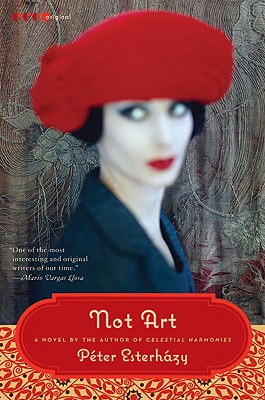 Share:
?I WILL WRITE ABOUT ALL THAT IN MORE DETAIL LATER.?

The final sentence of Helping Verbs of the Heart - was it a promise, a threat, a quote? In 1985, when Peter Esterhazy?s book came out on unnumbered, black-edged pages, this much-cited sentence seemed most likely to be the manifestation of authorial posturing. After the publication of his books on his father Celestial Harmonies and Revised Edition, this sentence and the preceding book on his mother?s death, broken up into auxiliary verbs, now gain new meaning twenty-three years later in Not Art.

Not Art is the book of the reawakened mother, a mother who knows the offside rule, and whose language, which determines her relationship to the world, is the language of football. The son only exists in relation to it, just as everything and everyone else only exists in relation to this mother?s football language. Football, in the author?s last book a stage and a medium for private historiography, now acts as a worldview, its roots in his relationship to his mother and his mother tongue: a mother?s language complex.

Readers seeking ?family stories? will find them - in subtly written, rounded stories. Those looking for emotions will find them too: platonic love, marital love filled with tenderness, and of course love for his mother and father. And those interested in the esterhazyesque auto-reflexive textual world (where does the author begin and end) will not be disappointed either. Irony, beauty, history, the Magnificent Magyars, father, grandmother, aunt, uncle, mother, life and death, especially death, but beautifully written. And life too, of course, which comes before death.

?My mother talked her way through the entire sixties and seventies in French. Boy, even comrade sounds bearable in French. She slipped into the French language as if into a bunker. No, a bunker would be more German, concrete protection; language is a lighter form of asylum, if danger were ahead it would provide no protection, a hiding place, a hideout, a wing under which one cannot shelter. Whenever she left French she immediately moved into football. One might say my mother was on the run her whole life long. And one might also say that she was happy her whole life long.?