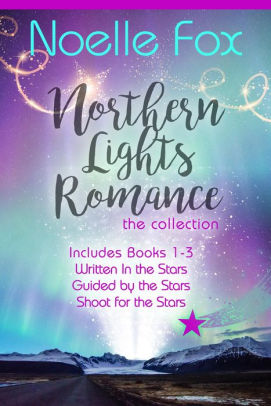 Written In The Stars
Miserable after her restaurant's failure, when chef Grace Cooper receives a deathbed letter from the father she thought was already dead, offering a free vacation at an Alaskan resort, she jumps at the chance to learn about the father she never knew and to get some rest.
Instead, on idyllic Polaris Island, she bumps into the still-irresistible Connor Reed, a humiliating nightmare from her past, and discovers truths about her dad that shock and upset her.
Connor has no idea why Grace hates him. But one look at the woman he's carried in his heart for the last seven years convinces him that his philosophy of living only for today has to change. As Grace's brittle shell crumbles, Connor starts dreaming of his future -- with her.


Guided By The Stars
After Dr. Hannah Shaw's four-year-old daughter is released from the hospital following a serious bout of pneumonia, a two-week vacation sounds perfect. And when she arrives on Polaris Island she instantly feels at home. A vacation fling isn't part of her plan until she meets sexy Luke Baldwin.
As a marine biologist, Luke provides whale watching tours to subsidize his research on the island, keeping his distance from women after tragically losing his girlfriend a year ago. Yet he can't stay away from Hannah and Bree. In no time at all, the little girl, and her stunning mother wiggle their way into his heart.
Hannah finds herself falling for Luke, until the truth about her father comes to light. Will Hannah find a way to move beyond her shattered trust long enough for Luke to guide her to everlasting love?


Shoot For The Stars
A year after the death of her mother, accountant West Alden still intends to get away from her desk and change her life, but all she's changed is her dress size. When a letter arrives offering a vacation at Northern Lights Retreat, she sees it as the chance to fulfill a bucket wish.
Uptight, by-the-book lawyer James Whittaker is not a fan of Derek Wakefield's scheme to get to know his daughters by offering free vacations. But when West arrives, all he can think about is how glad he is that she's there. In her company, he not only discovers the joys of Polaris Island, he loosens up -- and even begins to fall in love.
Can West get over her past and make a future with a family she never knew she had? More importantly, can she shoot for the stars and trust that love is real when she's never known love before?