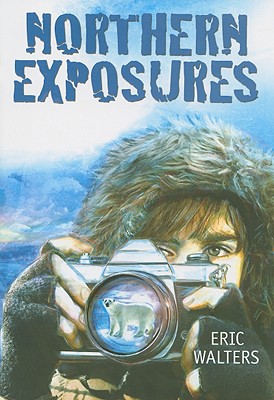 Kevin Spreekmeester can't believe it's not a practical joke. He's just won a photography contest he doesn't even remember entering and his winning photo was the result of a weird shutter glitch - not the amazing talent that the judges seem to think he possesses. What's even more bizarre is that the prize is a five-day trip to Churchill, Manitoba, to photograph polar bears with a renowned wildlife photographer. It all sounds pretty good though - it's a chance for Kevin to escape his uber-controlling parental units and the tedium of school. Of course, Kevin doesn't count on losing his luggage, or becoming the youngest - and most reluctant - member of a seniors' eco-tour, or even finding himself sprinting across the tundra with a very large, hungry polar bear about to swat him into oblivion.
Northern Exposures is Eric Walters' latest thrilling adventure complete with his trademark humor and sensitivity toward the growing-up challenges faced by his young characters. It's fun and exciting - packed with fascinating encounters with bears and thrilling rides in the gargantuan all-terrain buggies used to spot Arctic wildlife - and it manages to introduce the issue of environmental commercialization to its young audience with subtlety. Always a number one choice of both kids and parents, Eric Walters does it again with this terrific new story.
Reviews from Goodreads.com