No Way Out — Alan Jacobson 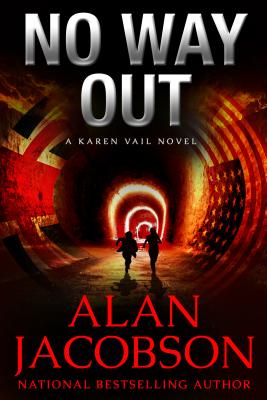 When a potent firebomb destroys part of an art gallery in an exclusive London district, FBI profiler Karen Vail is dispatched to England to work with Scotland Yard on drafting a threat assessment to head off future attacks. But Vail soon discovers that at the heart of the bombing lies a four-hundred-forty-year-old manuscript that holds clues to England’s past―with dramatic political and social implications. The manuscript’s content is so explosive that a group of political radicals is bent on destroying it at all costs.Or is it the work of someone else? The trail leads Vail to a notorious fugitive who has escaped law enforcement for decades, and who appears to be planning a major attack on London and the United States. When Hector DeSantos, banished from the US Department of Defense and now a rogue covert operative, turns up in England and takes actions that threaten Vail’s life, she finds herself on the run from the British security service, Scotland Yard, and a group of internationally trained assassins―all determined to silence her . . . all tightening the net to ensure that she’s got no way out.With his trademark spirited dialogue, page-turning scenes, and well-drawn characters, national bestselling author Alan Jacobson (“My kind of writer,” says Michael Connelly) has once again crafted an intelligent, twisting thriller destined to be talked about long after the last page has been turned.
Reviews from Goodreads.com