No Limit to Love — Kate Freiman 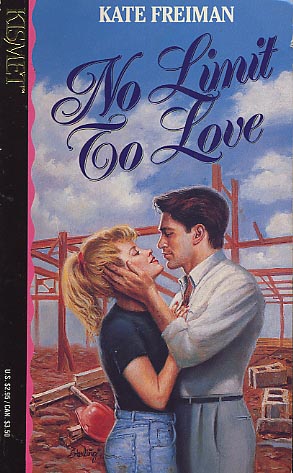 Lisa Sutton jumped at the chance to prove she was good enough as an engineer to manage a construction project in British Columbias breathtaking Okanagan Valley It was a dream come true for a woman who hated the word can't. Despite her lack of previous experience, she was winning the cooperation of the macho workers who called her "Little Boss" and treated her as if she were a wayward girl scout. The old farm was becoming a state-of-the-art hockey camp for teens. Everything was falling into place.

When "Bruiser" McKay, general manager of a professional hockey team, grabbed the skinny kid dangling from the ladder, he got more than he expected. From the instant Bruiser realized this delicate, beautiful woman was the civil engineer managing his project, he knew he had to fire her for her own good. Lisa was too fragile, too vulnerable, too tempting. He had to protect her from the hazards of construction, and from the roughness of the crew. And he had to protect her from an even bigger danger: himself. But when he looked into her innocent blue-gray eyes, Bruiser couldn't help wondering who would protect him from Lisa?