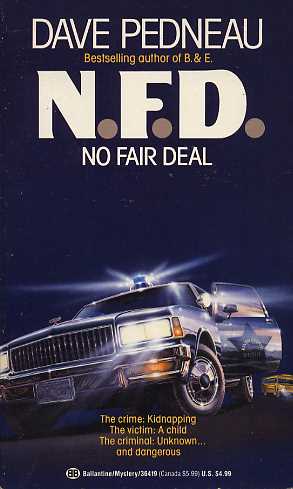 
THE ABDUCTION:
Ws no laughing matter when a terrified three-year-old girl is kidnapped from Milbrook's FunTime Day-Care Center by a man in a clown mask. It's every parent's worst nightmare -- and a delicate matter for Raven County's special investigator, Whit Pynchon.

THE SUSPICION:
The little girl's frantic mother is certain that her ex-husband is responsible, and it looks as if Whit may have only a routine custody battle on his hands. But when a mysterious prowler begins stalking another child from the same day-care center, Whit is convinced that the snatched toddler is facing a much uglier -- and possibly deadly -- fate.

THE EXPLOSION:
As the furor heats up -- in the town, in the press, and in Whit's personal life -- he and his lover, newspaper editor Anna Tyree, find themselves in the eye of the storm of controversy. With one child still missing and another in certain danger, Whit must double his efforts to unmask and capture a kidnapper who may be desperate enough to turn killer....