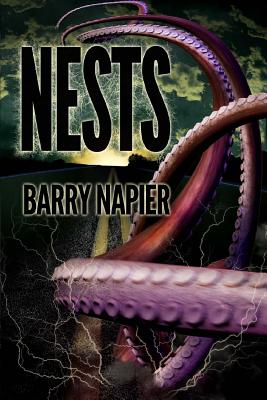 
The monsters came out of nowhere. Even before we starting dropping nuclear warheads on them, we didn’t know where they came from. We just knew that they were huge. Most of the population perished as a result of the monsters, the bombs, or the fallout. Those that survived roamed the landscape for supplies or other people. Some of them discovered that the monsters left behind nests that sit upon the landscape like sunken storm clouds. And something inside is alive. Kendra and Eric face their own trials as they seek out a rumored military safe zone. With a baby in tow and violence at every turn, the nests become an afterthought until they find themselves forced to enter one. Inside, there is only death and madness—something they will have to adapt to if they want to survive.