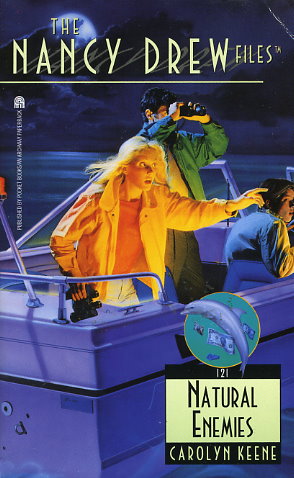 AMID THE BRIGHTEST WONDERS OF THE SEA, NANCY PLUNGES TO THE DARKEST DEPTHS OF DANGER!

When Ned's invited to study at the Rocky Isle Marine Institute in Maine, Nancy joins him as a volunteer at the facility's aquarium. But Ned fears that a handsome tour guide is creating serious waves in their relationship. Nancy, however, has to deal with a different kind of storm -- one threatening to destroy the entire institute.

Already in dire financial straits, the aquarium has lost its prized baby dolphin, and someone's demanding a million-dollar ransom. Is it Matt FaIton, animal-rights activist and major TV star? Nancy suspects that a deadlier human shark is on the prowl, and she'll take any risk -- even act as bait -- to ensure the dolphin's safe return!
Reviews from Goodreads.com