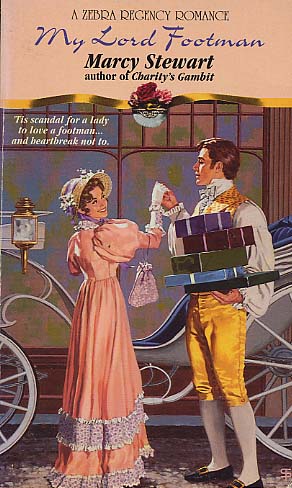 Tis scandal for a lady to love a footman...and heartbreak not to.

THE NEW FOOTMAN WAS AN IRRESISTIBLE FORCE. THE EARL'S DAUGHTER WAS AN IMMOVEABLE OBJECT. THEIR MEETING COULD LEAD TO ONLY ONE THING. LOVE.

Ever since her sister had been kidnapped and held for ransom the summer before, Lady Druscilla Selby was no longer the carefree miss she'd once been. To make matters worse, her father now kept her practically under lock-and-key. But this latest security measure was too much to bear. Kyle Duncan was certainly a fine specimen of manhood--but a mere footman...as her protector?!

The real problem, of course, was that the enigmatic, green-eyed Scotsman awakened feelings Druscilla couldn't explain. His laugh filled her heart with joy...and outrage. How dare he take such liberties! How dare he make her happier than any man had a right to! And how dare he not return her love now that her life was in danger...and now that she had fallen for a footman who had turned the tables and become lord of her heart!
Reviews from Goodreads.com