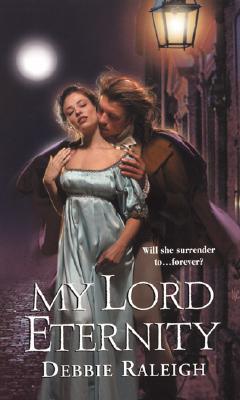 While the ton dances and gossips, another kind of society altogether claims the London night as its own. By the light of the moon, three noble vampires entrusted with the protection of their kind will discover that human desire is far from lost to them--and that love may be the only thing they long for more than life everlasting...

DESIRE HAS NEVER BEEN SO DANGEROUS
Seduced and cast aside by a rogue, Jocelyn Kingly survived the shameful scandal with her pride intact, as well as a new determination to save women less fortunate than she was. Her mission is aided by a well-intentioned vicar named Amadeus Fallow, whose services prove invaluable. Despite the fact that his presence on occasion makes her skin crawl with unease, his assistance is far preferable to the attentions of charming Lucien Valin.

Rakish and self-indulgent, Lucien is exactly the sort of man she detests, even though her overwhelming attraction proves impossible to deny. But when the local brothels are terrorized by a plague of vicious murders, Jocelyn discovers that there is more to both Amadeus and Lucien than she ever imagined--and that a mysterious amulet in her possession is at the core of their dark, unearthly secrets. Can she trust the man who claims to be her friend...or will she surrender to the man who longs to be her lover?
Reviews from Goodreads.com