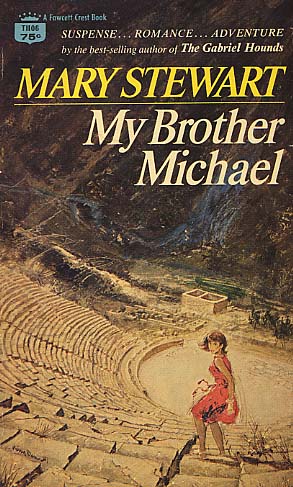 ONLY A MOMENT BEFORE

Camilla Haven is on holiday alone, and wishes for some excitement. She had been sitting quietly in a crowded Athens cafe writing to her friend Elizabeth in England, "Nothing ever happens tome..."

Then, without warning, a stranger approached, thrust a set of car keys at her and pointed to a huge black touring car parked at the curb. "The car for Delphi, mademoiselle... A matter of life and death," he whispered and disappeared.

From that moment Camilla her life suddenly begins to take off when she sets out on a mysterious car journey to Delphi in the company of a charming but quietly determined Englishman named Simon Lester. Simon told Camilla he had come to the ancient Greek ruins to "appease the shade” of his brother Michael, killed some fourteen years earlier on Parnassus. From a curious letter Michael had written, Simon believed his brother had stumbled upon something of great importance hidden in the craggy reaches of the mountainside. And then Simon and Camilla learned that they were not alone in their search...

The ride was Camilla's first mistake... or perhaps she unintentionally had invoked the gods. She finds herself in the midst of an exciting, intriguing, yet dangerous adventure. An extraordinary train of events turned on a nightmare of intrigue and terror beyond her wildest daydreams.
Reviews from Goodreads.com