Murder to the Metal — Annie Hogsett 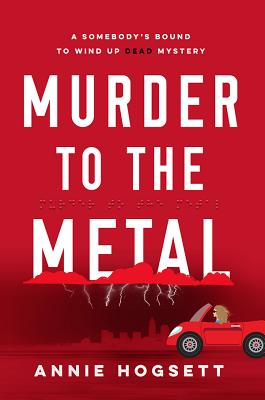 Share:
Mondo mega money is a murder magnet.
Ten months ago Allie Harper―smart, feisty, too broke to get her car fixed―rescued Thomas Bennington III―a hot, blind, college professor―from a crosswalk in her dicey Cleveland neighborhood. When Allie saved Tom and his groceries from traffic, she unwittingly retrieved his winning $550 million MondoMegaJackpot ticket. The payout steered the two of them into a wild dash from romance to mayhem and multiple murders.
Nothing's changed. Sure, Allie and Tom now reside in a rented nine-thousand-square-foot lakeside mansion with a sky-lit shower and breathtakingly high-thread-count sheets. True, Otis Johnson, Allie's deliverer from last summer's would-be-kidnapper, is now their live-in bodyguard and gourmet chef. Yes, Allie's dream of creating the T&A Detective Agency to solve "mysteries of the heart" by using Tom's money, Otis' P.I. credentials, and Allie's intrepid...intrepidness... now has its first case.
That's where the real trouble kicks in.
Lloyd Bunker's obsession with avoiding stoplights has run him and his '67 Pontiac GTO off the road, maybe for keeps. As they race to figure out what's happened to Lloyd, T&A recruits Allie's former nemesis, Officer Tony Valerio, plus her best friend and ex-landlady Margo and television reporter Lisa Cole, to help them follow a lethal trail of escalating crimes ranging from scrapping to pushing opioids to multiple murders. It's no longer just about Lloyd.
An assault on the mansion's high-tech security system by a talented hacker signals the presence of a formidable adversary, one with big bucks and a ruthless plan to destroy the lucky couple. As the action ramps up, Allie and Tom are plunged into a high-speed race against danger and death.... It's Murder to the Metal.
Somebody's Bound to Wind Up Dead series:
Too Lucky to Live (Book 1)
Murder to the Metal (Book 2)
The Devil's Own Game (Book 3)
Praise for Annie Hogsett:
"The original voice, humor, and unusual premise will appeal to Janet Evanovich readers." ―Library Journal STARRED review for Too Lucky to Live
"Fast pacing, multiple plot twists, and humor, including a Stephanie Plum-like main character, enliven the story and keep the pages turning." ―Booklist for Too Lucky to Live
"The bittersweet mystery, with the open-ended threat of a villainous mastermind, is reminiscent of P.J. Tracy's early 'Monkeewrench' novels." ―Library Journal for Murder to the Metal