Murder on the Mauretania — Conrad Allen 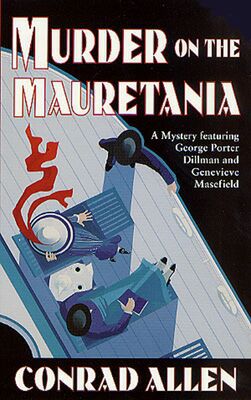 DEATH ON THE HIGH SEAS

Only a few short months after crossing the Atlantic aboard the Lusitania, George Porter Dillman and Genevieve Masefield are back in Liverpool to embark on the first voyage of the Mauretania. Again working undercover as private detectives, the two mingle effortlessly among the ship's other passengers. Soon after it leaves port, the vessel is battered by severe weather that confines the passengers to their cabins. Then one of the passengers vanishes, complicating already unpleasant circumstances.

At first believing that the man was simply swept overboard in the storm, Dillman and Genevieve soon come to realize that his disappearance is an act of murder. The crime is connected with the presence on board of a record shipment of gold bullion--twelve tons in all--sent from the Bank of England to help bolster a precarious American economy. The two have their hands full. Apart from coping with dozens of problems thrown up by the violent weather, they have to solve a murder, catch the thieves, and retrieve the stolen bullion, all without breaking their covers.
Reviews from Goodreads.com