Murder on the Leviathan — Boris Akunin

PARIS, 1878: In a stately mansion on the rue de Grenelle, an eccentric antiquarian and nine members of his household are found murdered, and a precious Indian statue is missing. The only piece of evidence from the crime scene is a golden badge shaped like a whale. The trinket is in fact the emblem of the Leviathan, an enormous steamship soon to depart for Calcutta. Surely the murderer must be among its passengers. In Cairo, the ship is boarded by a young Russian diplomat with a slight stammer none other than the intrepid detective Erast Fandorin. He joins forces with the Parisian police commissioner to find the killer. As the Leviathan steams toward its destination, will Fandorin be able to discover the identity of the killer, even as the ship's passengers are murdered one by one?
Reviews from Goodreads.com 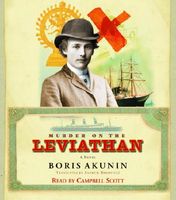