Murder of a Snake in the Grass — Denise Swanson 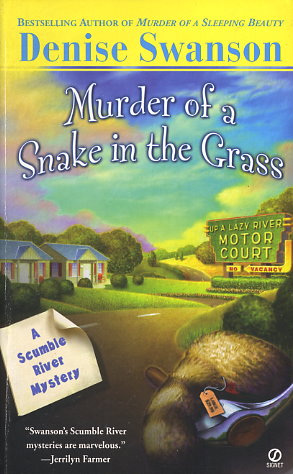 Scumble River is celebrating it's bicentennial in style-- with Historical Society Reenactments, a bingo tent, Crazy Craft Race, and a coal-tossing tournament. Serving as the guest of honor is none other than the town founder's great-great-grandnephew, Gabriel Scumble. But his visit turns out to be short-lived when Skye's students, Frannie and Justin, find him dead, a pickax protruding from the chest area of his authentic buckskin costume.

Meanwhile, Skye's deceitful ex-fiance Luc St. Amant has appeared out of the blue, creating turmoil in her love life. Does the real danger lie in the possibility that Luc will drive away the men in Skye's life...or is there a more menacing connection between Luc's arrival and Gabriel Scumble's murder?
Reviews from Goodreads.com