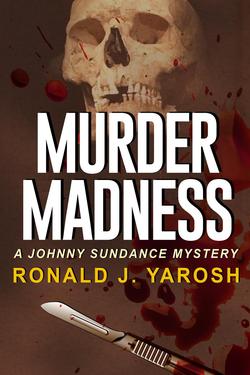 
A strange suicide. A gory murder. Can a clever PI protect a med school from a killer’s dark desires?

PI Johnny Sundance’s head injury has temporarily dulled his genius. As he investigates a simple suicide, his foggy mind can’t explain why the medical student behaved like a pregnant woman before he ended his life.

Straining to make sense of things, Johnny discovers an unusual murder case at the same med school. Teaming up with the detective in charge, reveals an even stranger circumstance: the killer stole the victim’s brain!

Can Johnny stitch the clues together before a mad murderer delivers another fatal headache?

Murder Madness is a standalone story in the Johnny Sundance Florida Mysteries series. If you like brilliant detectives, head-scratching cases, and a dash of dark horror, and interesting characters, then you’ll love Ronald J. Yarosh’s gripping novel.

Buy Murder Madness  now to butt heads with a brain-stealing killer today! See if you can figure it all out before Johnny does.