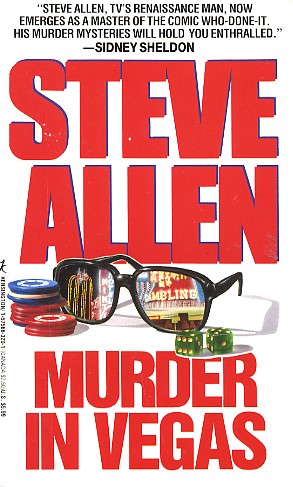 IT'S STEVE ALLEN'S MOST CHALLENGING PERFORMANCE YET WHEN A SHOW IN VEGAS TURNS INTO AN ENGAGEMENT WITH DEATH.

Murder was far from his thoughts as Steve Allen rehearsed with legendary crooner Buddy Hamilton on the stage of the world-famous Coliseum. Their old soft-shoe routine was a guaranteed show-stopper. The show was stopped instead by the frantic appearance of Jayne Meadows in a terry-cloth robe. "Murder..." she moaned, and fainted rather gracefully into Steve Allen's arms.

The victim was Buddy's glamorous, young wife Christie--strangled in the sauna. And even Steve had to admit that old friend or no, Buddy was looking quite guilty. But for once Steve was out to prove someone innocent rather than guilty. Armed with his intimate knowledge of the world of show business and a sleuthing technique that had by now acquired a certain je ne sais quoi, Steve was ready to solve this puzzling mystery and bring down the curtain on the real killer.
Reviews from Goodreads.com