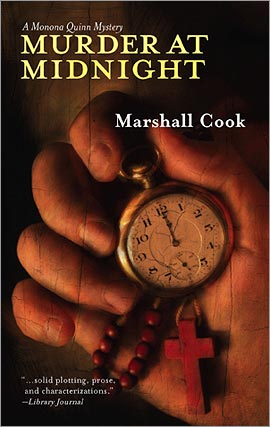 Parishioners attending the early mass at St. Anne's find the body of their beloved priest sprawled, throat slit, across the floor of the sacristy--a small cross etched in his chest.

It's a tragedy that hits community newspaper editor Monona Quinn hard. Father O'Bannon was a friend, kind and dedicated to his parishioners and his calling--so at odds with the brutality of his death. The cleric was opposed to the new highway proposal and real estate developers in the rural Wisconsin area--but how much of a threat could a parish priest be to big city developers? Was there hidden enmity among the more opinionated locals, including an activist teacher and a group of Catholic extremists, or perhaps some skeleton lurking in the good father's closet? The answers--and the killer--remain elusive, until a shocking discovery leads Mo to the terrible and tragic motive.
Reviews from Goodreads.com