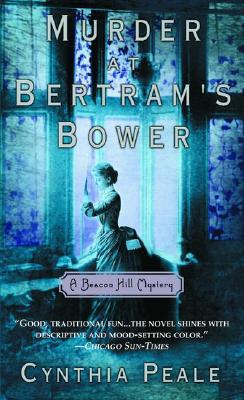 IN A HAVEN FOR FALLEN WOMEN, HAS HISTORY'S MOST DEPRAVED KILLER RISEN AGAIN?

The Back Bay has been filled in. Palm readers and prostitutes ply their trade in South Cove. And the watchword of the day is "NINA:" No Irish Need Apply. Boston in 1892 is a town of Victorian pride, prejudice, and private passions.

Now, on Beacon Hill, a crusading woman and her genteel brother, Addington, are investigating two grisly murders of young women, the work, say police, of "a deranged person." For Caroline Ames, solving the mystery is a matter of helping an old friend, the woman who runs a home for wayward women known as Bertram's Bower. But for Addington, the investigation will lead to the revelations of a sexually alluring, scandal-struck actress...and to the secrets of some of Boston's most "respectable" men.

As Addington confronts the hypocrisy of Brahmin society, he moves closer to a shocking suspicion about the killer's identity. And as fear grips the city, the evidence points in one frightening direction: that London's Jack the Ripper is alive, well, and killing again. . .
Reviews from Goodreads.com