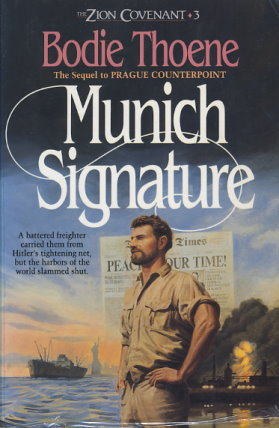 One Signature Could Seal the Fate of Europe Under Hitler's Tyranny

In Prague Counterpoint, Elisa Murphy and Leah Feldstein risked everything to stand against the tide of Nazi terrorism and to buy a chance at life for two small boys.
When Elisa is at last reunited with Murphy, the danger is past for the small Charles.

Munich Signature finds Leah and little Louis attempting to escape Austria over the treacherous foot paths of the Alps while Murphy and Elisa begin their trip toward New York and the promise of healing for Charles' disfigurement.

But then Elisa is once more caught in the web of international intrigue. While Jewish refugees from Germany float homelessly on the open seas, she stands precariously between Hitler's domination of Europe and the possibility of destroying his power once and for all.