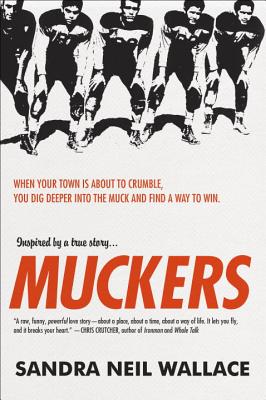 Former ESPN sportscaster Sandra Neil Wallace (wife to Knopf author Rich Wallace) makes her young adult novel debut with a historical fiction story that is equal partsHoosiers and October Sky. Felix O'Sullivan's world is crumbling around him: the mine that employs most of town is on the brink of closing, threatening to shutter the entire town. And Felix, or Red, after his fire-colored hair, will be one of 24 students in the final graduating class of his local high school. But Red's got his own burdens to bear: his older brother, Bobby, died in the war, and he's been struggling to follow in his footsteps ever since. That means assuming Bobby's old position as quarterback, and leading the last-ever Muckers team to the championship. Maybe then his angry, broken-hearted father will acknowledge him, and they'll be able to put Bobby's death behind them.

But the only way for the hardscrabble Muckers team to win State is to go undefeated, and tackle their biggest rival, Phoenix United, which would be something of a miracle. Luckily, miracles can happen all the time on the field. Fans of Friday Night Lights and Tim Tharp's Knights of the Hill Country will take to this enthralling story of a town rallying together to turn a tragedy into a triumph.
Reviews from Goodreads.com