Mrs. Malory and the Only Good Lawyer — Hazel Holt 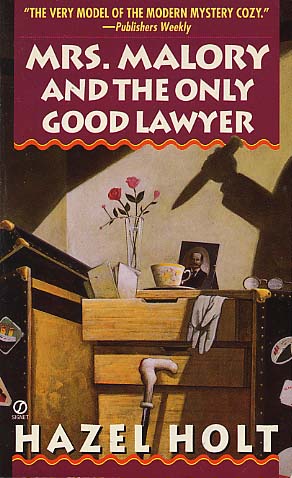 London solicitor Graham Percy has always been a trial, but Mrs. Malory's kindhearted late husband never could turn his back on his old Oxford acquaintance. Now Mrs. Malory has inherited the persnickety, long-winded bachelor and his interminable four-day yearly visits to her home in the scenic seaside town of Taviscombe. But this year is different. Graham Percy's stay is abruptly cut short ... when someone stabs him most fatally.

In death Graham Percy turns out to be anything but dull. Mrs. Malory discovers that although he was shockingly incompetent at law, he was brilliant at acquiring other people's secrets. Soon she is snooping into the very private lives of a seemingly proper professor of Classics; an author whose goat-raising wife could also have bats in the belfry; and a wheelchair-bound actor whose signature role is the great betrayer logo.

When Mrs. Malory unearths a motive rooted in a tragic tale of doomed love, she finds herself wrestling with her own conscience. For if the old axiom is true that the only good lawyer is a dead one, how do you unmask a killer whom nobody wants found?
Reviews from Goodreads.com