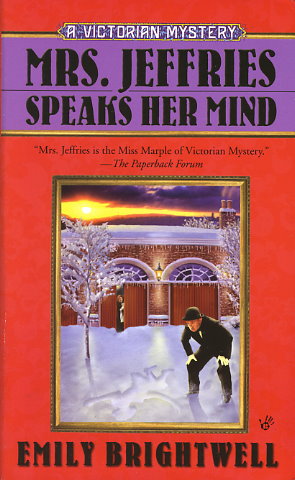 Olive Kettering was always eccentric, but recently her behavior had become downright peculiar. She'd joined an odd religious group, was estranged from her family, worked her servants mercilessly, and even insisted that there were people trying to harm her. What few friends she had left were sure she was imagining things. But during one of the worst storms in London history, Olive is shot and killed. It's a terrible way to be proved right. With no witnesses but plenty of people who wanted her dead, there is no shortage of suspects. It's a complicated case, but to see justice served Mrs. Jeffries has no problem speaking her mind.

A Mrs. Jeffries Mystery
She keeps house for Inspector Witherspoon...and keeps him on his toes. Everyone's awed by his Scotland Yard successes -- but they don't know about his secret weapon. No matter how messy the murder or how dirty the deed, Mrs. Jeffries' polished detection skills are up to the task...proving that behind every great man there's a woman -- and that a crimesolver's work is never done.